The RSPCA specialise in animal rescue, animal welfare and preventing animal cruelty in the UK. They rely on calls from the public to inform them about cruelty to animals or situations which could be harmful to animals. As a registered charity, they raise the necessary funds to support their work through charitable donations.

On average someone in England and Wales dials the RSPCA helpline every 30 seconds, so having a system to manage and effectively direct these calls is imperative. Gathering information from those calls and getting it into the field so that it can be acted upon quickly is vital to what they do.

Calls from the public to which the charity has to respond are recorded in TAILS, a central command and control system used in the RSPCA’s National Control Centre. When calls are received the jobs are then issued to one of the 400 RSPCA field officers across England and Wales. Job details which are sent encrypted include key data such as the name and address of the person reporting the incident, details of the incident location event/action, history of the suspect and any relevant additional information – for example if the reporter is aware of a potentially violent situation. Depending on the nature of the call, the police may also be required to assist.

Historically, the procedure for allocating jobs was via a phone call from the scheduling team in the National Control Centre to the officer with job details assigned over the phone. Relying on phone calls to issue jobs created problems; at times the officers may not have been able to answer the phone or a mobile phone signal may not have been available. A voice messaging system was also used to relay incident information to officers, but there was a chance that these may not have been listened to due to other work commitments.

In addition to this there was a lot of data which had to be shared between the dispatcher in the National Control Centre and the officer including the type of animal, the address, any details of the individuals involved for example historical data regarding an individual, previous visits, pending or past prosecutions.

Large volumes of critical data were given during a conversation via mobile phone. If the officer didn’t receive the message in its entirety they risked missing vital information that would been supplied, including potentially critical Health and Safety content.

All jobs were communicated in this way and the officer had to take their own notes and then complete paper based activities to close out the job. Information from field staff following a visit to the incident location to update TAILS was returned via a voicemail system. As the demand for more accurate information increased, the RSPCA acknowledged that they needed to update their systems and processes to enable them to deliver better information on their activities not only to ensure they operated efficiently, but also to help with the increased requirement to meet government legislation and present the Society’s case effectively.

Mobilising their workforce and creating a central repository for their data was the main driver of this project. The RSPCA recognised that they were having problems managing their data, dealing with work tasks and getting information out to and back from the officers who work remotely.

With over 400 officers working across England and Wales, it was important that their activities were streamlined. The officers had to complete paper based work tasks, carry three separate devices in addition to Sat Nav equipment and wait for their work to be phoned through to them.

The Society specified a requirement to provide mobile devices which could be linked to the TAILS control system. The solution was designated as MICE (Mobile Integrated Communications Equipment) and AMT-SYBEX was selected to create, deliver and manage the solution, which allows officers to receive and manage their work on mobile devices.

The new application is loaded onto one of the latest Motorola devices which allow users to review and update information on jobs that have been assigned to them. Officers are able to set their status in respect of the incident they are working on i.e. “en-route” or “arrived at”, they can use the Sat Nav integration facility to load any address within an incident by a simple tap of the hyperlink which then launches the Sat Nav application, upon arrival they simply exit Sat Nav returning to the MICE application screen.

The solution also allows inspectors to view historic jobs that are still open and assigned to them. This ensures that jobs were closed out effectively because the inspector had visibility of outstanding jobs against their name.

Part of the integration with the mobile device was to allow seamless operation of Sat Nav software, removing the need for a separate and additional device.

All information about the job is available at their fingertips; they can review this information before going to the job to ensure that they are better prepared for whatever situation they may be met with.

“We have been working closely with AMT-SYBEX on the new systems and are delighted with the end result. Our workforce are now mobilised in the field making them more efficient in their roles and helping us to save more animals from cruelty and neglect.

Other benefits include less paperwork, a common information platform for all our officers, improved ‘lone worker monitoring’, as well as a better way of allocating work to our staff working on the front line.”

Numerous benefits have been recognised as identified by Mr Harding. Not only has the charity been able to reduce the costs of administrative tasks, but they have improved Animal Welfare as the speed of incident awareness has increased.

Get our news and insights in your inbox

Our Know How emails and other occasional communications will bring you insights from our most experienced people, reflecting on the challenges and opportunities facing the essential industries.

Sign up now...to get our news and insights in your inbox
Case Study – RSPCA Bespoke mobile solution 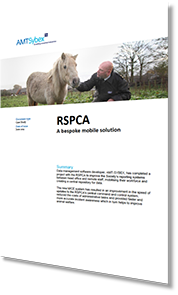 Get our news and insights in your inbox

Our Know How emails and other occasional communications will bring you insights from our most experienced people, reflecting on the challenges and opportunities facing the essential industries.
Sign up now...to get our news and insights in your inbox